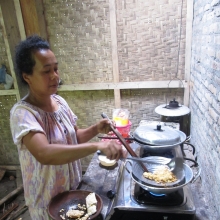 Blog » Monitoring and Evaluation of the Jiko Poa Cookstove in Kenya

Monitoring and Evaluation of the Jiko Poa Cookstove in Kenya

The Jiko Poa is a locally manufactured rocket-type biomass cookstove being distributed in Kenya by the Paradigm Project1. The aim of this study was to provide a performance assessment for the Jiko Poa in Kenyan homes by analyzing its effects on household air pollution and fuel use, and by collecting qualitative and quantitative data on how the households valued and used it. The study employed a ‘before after’ design: initial baseline measurements and surveys were conducted in the homes, after which the Jiko Poa was introduced and a second round of measurements and surveys were carried out about two weeks later. The air pollution and fuel use indicators as well as qualitative metrics of usage and preferences were measured over the two 24-hour periods only. Quantitative measures of usage from temperature sensors were collected continuously over a longer time horizon for all the cooking devices in the home, starting after the introduction of the new stove and continuing in a subset of homes for 10 weeks.