Blog » Nepal’s Jobs are Improving, but Women are Losing Out, by Elizabeth Ruppert Bulmer

Nepal’s Jobs are Improving, but Women are Losing Out, by Elizabeth Ruppert Bulmer

Nepal’s jobs are improving, but women are losing out

Nepal’s economy is making great strides towards better work opportunities for its labor force. But not all job-seekers are able to access good-quality jobs…especially women.

In the past 10 years, wage jobs are increasingly available, particularly in urban centers. Kathmandu and its environs have experienced a population boom, as workers from other districts and provinces seek the more diverse and better paying jobs that cities provide. Wage jobs increased from 17% to 24% of total employment between 2008 and 2018, contributing to higher household incomes and lower poverty rates.

Despite important gains, there are not enough wage jobs to absorb all job seekers. Only one-quarter of jobs in Nepal are wage jobs. This shortfall leads many – mostly men – to seek work abroad. By 2018, there were 3.8 million wage jobs in Nepal, while another 2.8 million Nepalese were employed in wage jobs in other countries, and send back remittances equivalent to 30% of Nepal’s GDP.

Six in ten jobs within Nepal are unpaid, and these are disproportionately held by women.  Nepal remains a highly rural economy where subsistence farming is the main economic activity for women. This means that most working women use their productive capacity to feed their families. Yes, this is an important use of women’s time; but it generates no income for them and underutilizes their human capital. As a result, Nepal’s economy is losing out on much of the production potential of women, and women have limited agency.

Things are changing, but fundamental change takes time. Production is steadily shifting away from agriculture to industry and especially to services. Four million jobs were created over the last decade,  across a mix of low-productivity and high-productivity sectors.

Real wages increased in all sectors, and there are more jobs of higher quality today compared to 10 years ago. These gains translate into improved worker welfare on average. But faster progress is needed to absorb underutilized workers into better-quality and well-paid jobs.

What would faster progress look like? More permanent wage jobs; more jobs within firms, especially in small and medium-sized enterprises (SMEs) with relatively high productivity; a dynamic and competitive SME sector; higher levels of domestically-added value in goods and services that are competitive on the global stage.

Evidence from a combination of data sources – labor force surveys, a 2018 census of firms, and a 2019 survey of 900 small and medium-sized enterprises across 6 districts – points to the following key impediments to achieving better labor market outcomes in Nepal.

Effective policies for improving job outcomes in Nepal should focus on (a) fostering SME productivity and growth; (b) improving the business environment and labor market policies; (c) increasing the individual, family and economy-wide benefits of international migration; and (d) preparing and connecting women and youth to better job options including entrepreneurship. 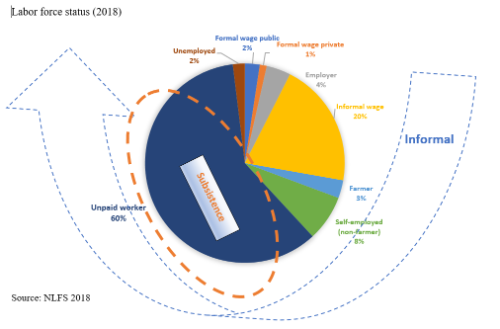