by: Asif Islam and Dalal Moosa

The coronavirus pandemic and ensuing economic downturn is taking a toll on the countries of the Middle East and North Africa (MENA) region, much like the rest of the world. By the beginning of July of this year, there were over 95,000 confirmed COVID-19 cases, with a fatality rate of about 2.5%.[1] Besides the human casualty of this global crisis, the pandemic has halted economic activity and work, plunging oil prices and leading to a forecasted contraction of 4.2% of the region’s Gross Domestic Product (GDP) this year. A particular risk for MENA is the weakening of an already fragile private sector and jobs scene. Rebuilding better and stronger needs an understanding of some of the possible reasons behind this fragility.

While similar evidence from the Gulf Cooperation Council countries is sparse, it is reasonable to assume that they do not deviate from this story given the size of their public sectors and the role that merchant oligopolies play in their economies. Some evidence from Saudi Arabia, for example, show that at least 30% of private sector employment was in very large firms (500+ workers) in 2011.[4] and more than 50% in firms with 50 or more workers in general.

In the MENA region, Jordan seems to deviate from this, with a significant share of employment being in small and medium enterprises firms, although large firms still play a major role in employment. Some evidence from Morocco[6] and the West Bank and Gaza[7] also seem to suggest similar findings, where the bimodal distribution is not as stark.

This raises a key question: What may be hindering some small and medium enterprises from growing and being major job creators in the region?

We postulate, in this blog and the upcoming MENA Flagship, that one of the root causes is limited market contestability that constrains the role and growth of these enterprises. We highlight two suggestive indicators from the most recent wave of the World Bank Enterprise Surveys that undermine this contestability from opposing angles – political connections and informality. 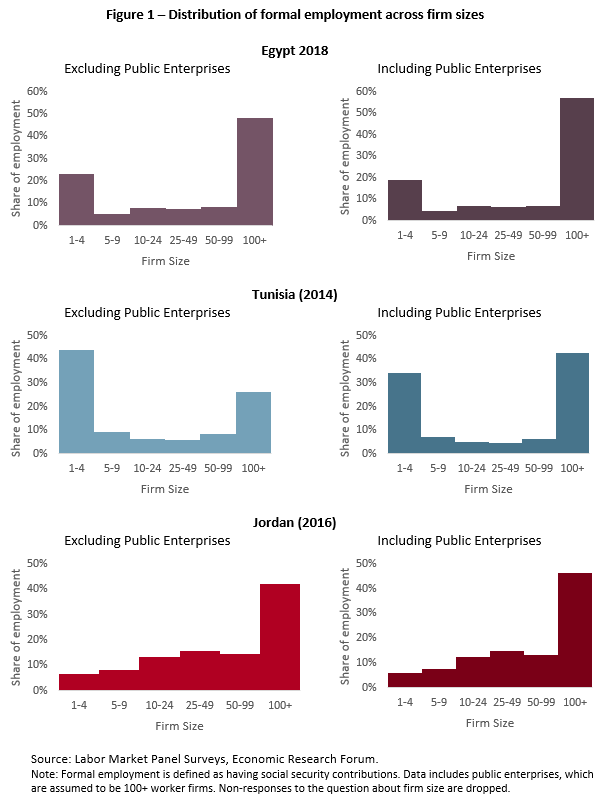 Lack of competition in markets can be due to the role of special interests, as has been argued  in Tunisia and Egypt. The most recent wave of the World Bank Enterprise Surveys shows that larger firms are noticeably more likely to be politically connected than small and medium enterprises in the region - where political connection is defined as having  the owner, CEO, top manager or any board members of the firm being elected or appointed to a political position at any point in time (Figure 2).

The prevalence of political connections in large firms adds a layer of obstacles for small and medium enterprises to compete. Capture by special interest has been found to be associated with cumbersome regulations, corruption, and poor provision of public goods. The latter may be crucial for small and medium enterprises that do not have the resources to accommodate poor provisions of basic infrastructure.

As small and medium enterprises face unfair competition from larger businesses, they face another set of challenges at the other end of the spectrum, particularly with the informal economy. There is some evidence that competition from the informal sector may curb resources available to formal firms reducing their performance (see here and here). The surveys show that firms in the MENA region, regardless of their size, report facing a higher level of informal competition in comparison to other economies in the European and Central Asia region, around the same period (2018-2020). Within the region, in Egypt, Lebanon, and West Bank and Gaza, a larger portion of small and medium enterprises face competition from informal firms (Figure 3). In Morocco and Jordan all firms seem to face pressure from informal firms, regardless of size.

To conclude, we find a fairly robust pattern of employment shares across firm-size categories in the region that potentially indicate a hollowed-out SME segment in some countries. At the same time, both political connectedness and informality are prominent features of the private sector in the MENA region that may be contributing to this pattern and weakening market contestability from opposing angles.

This is, of course, is only one part of the story that we hope to delve into in the future. 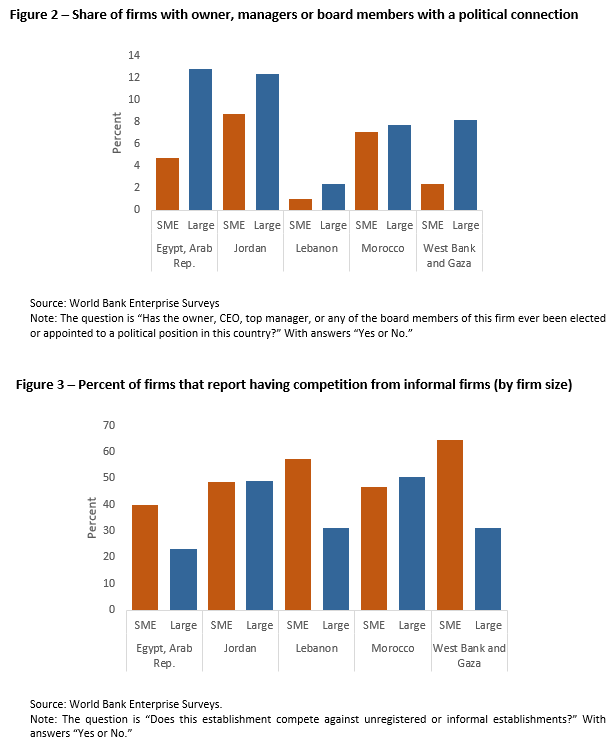 [1] Authors calculations based on data from the World Health Organization.

[2] We categorize the self-employed as “microenterprises” as well.

[3] We make the reasonable assumption here that public enterprises tend to be 100+ worker firms.

[4] This is not restricted to formal employment. Firm categories differ, making a fully comparable picture difficult.

[6] Based on on-going World Bank work.

[7] Based on the Labor Force Survey of 2016, available through the Economic Research Forum.