A New Jobs Compact for More, Better Jobs in Guatemala by Andreas Eberhard-Ruiz

A New Jobs Compact for More, Better Jobs in Guatemala

‘Building back better’ has become a popular theme guiding the world’s post-Covid19 recovery efforts; in few middle-income countries this appears to be more pressing than in Guatemala. While the economic impact of the Covid19 shock in Guatemala is yet to be fully assessed, there is little doubt that the pandemic has hit the country at a particularly untimely moment. Over a decade of lackluster growth and stagnating productivity improvements have led to an acute shortage of quality jobs, the effects of which started to show well before the Covid19 pandemic. No indicator displays this more clearly than the 21 percent drop in real average hourly labor earnings witnessed between 2004 and 2018. In Guatemala, the Covid19 shock hit the economy on top of a labor market that was already in crisis. A return to a business-as-usual scenario, once the country recovers from the short-term effects of the Covid19 shock, cannot be an option for Guatemala. 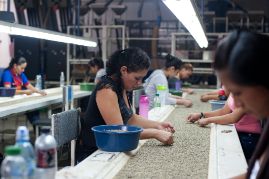 A new World Bank Jobs Diagnostic study identifies the key structural challenges that need addressing to allow Guatemala to break free from a low-level equilibrium with high levels of informality, depressed labor earnings, low female labor force participation and high rates of outmigration. Over the next decade the economy will require a net increase of 132,000 new jobs a year to maintain pre-Covid19 employment ratios. Ensuring that new jobs are created in productive and well-paying activities is paramount, yet represents a formidable challenge. Already before the Covid19 pandemic, only one-fourth of Guatemalan workers had a job in the formal sector, and new formal sector jobs were being added at a rate of less than 1,000 a year. Instead, new jobs were almost exclusively being created in the informal sector in predominantly low productivity activities. For 40 percent of households, this implied that incomes earned on the labor market were insufficient to meet the World Bank’s international poverty line for lower middle-income countries of US$ 3.20 in purchasing power parity terms (2011 constant prices). Many households thus relied on other sources of income, such as remittances, to prop up their incomes. Faced with a lack of opportunities, Guatemalan households also seemed to be rationing their supply of labor, with women being the first to stop working resulting in significantly lower female labor force participation than what would be expected at Guatemala’s level of development. Furthermore, deteriorating employment prospects implied rising migrant outflows that reflected the frustrations of an increasingly educated workforce unable to meet the rising expectations of higher levels of educational attainment.

What needs to be done? “Never let a good crisis go to waste”, Winston Churchill famously said in the aftermath of WWII. In similar vein, the disruption caused by the Covid19 crisis should be used strategically to build reform momentum around a new Jobs Compact that focuses on addressing the structural bottlenecks preventing so many Guatemalans from being employed with better paying and more productive jobs. The Jobs Diagnostic study highlights two key areas, where urgent reform is needed.

First, policy action is urgently needed to strengthen education quality, particularly in the more deprived departments to the north of the country. There are large spatial differences in education quality in Guatemala. The gap to the country average, is particularly wide in departments to the north of the country that experienced the highest demographic pressures on the schooling system over the last decade. Spatial inequalities in schooling quality shut large parts of the population off from access to better jobs. They are also key constraint to internal mobility as schooling quality in places of origin becomes a limiting factor in migrants’ ability to find a better job in the more productive areas of the country. Guatemala’s ongoing demographic transition offers a unique opportunity to address spatial inequalities. With fewer births, pressures on the schooling system will start to ease, particularly in the richer regions where the transition seems to be taking place at a faster pace than elsewhere. This should allow policymakers to give greater priority to deprived areas and to work towards a levelling of quality differences in the education system across the country.

Second, a big push will be needed to remove barriers to formalization, create a level playing field between incumbent and new firms, and attract increased foreign investment. Guatemala’s economy is heavily dependent on economic activity of its formal firms. But the formal sector lacks dynamism, displays almost no firm entry or exit, and is characterized by one of the oldest firm-age structures worldwide. Consequently, formal firms that face favorable conditions do not expand the activities as one would expect them to. A comparative look across countries underscores this: A firm in Guatemala experiencing robust growth in sales is significantly less likely to grow its workforce than a similar firm elsewhere in the LAC region. The lack of dynamism in the formal sector does not extend to the informal sector, where the number of informal firms has been growing strongly over the last decade and a half. The challenge is that these firms are less productive, are typically small and seem to be either unwilling or unable to formalize. Efforts to further reduce the costs associated with the regulatory regime will go some way in easing the marked formal-informal divide between firms, particularly in relation to labor regulations. Minimum wage legislation for instance, could be reformed to better reflect the high differences in productivity across Guatemala’s geography. Redundancy costs could be brought in line with the average in the LAC region to incentivize more formal hiring of workers. However, the biggest problem in the private sector seems to be an overall lack of market contestability on account of widespread favoritism and business corruption. These practices create high barriers to market entry for informal firms that want to formalize and for new firms that want to establish themselves. Governance and institutional reforms are needed that put high penalties on nepotism and crony capitalism and that create a level playing field between incumbent firms and newcomers. These should be complemented with efforts to attract increased FDI, which can be an additional source of dynamism and innovation, particularly when it generates competitive pressures that force firms to improve their business practices, to invest into new technologies and to strive for increased productivity, resulting in better jobs for more of Guatemala’s people.