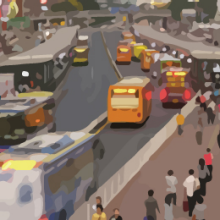 Jan Gehl on changing mindsets about urban planning and living.

FYI:  A 10 mins video of a fascinating speech by the guy behind many good transport stuff in Copenhagen, London, and NYC.

Jan Gehl, Professor of Urban Design at the School of Architecture at the Royal Danish Academy of Fine Arts in Copenhagen, and founding partner of Gehl Architects - Urban Quality Consultants, gave insightful talk at the Opening Plenary of the EFC AGA and Conference in Copenhagen on 31 May. After screening his short film, "The Human Scale", which showed a global panorama of cities, the challenges they face, and some solutions, Mr Gehl shared his view of the importance of the good city for the cities today and for the future.
His main point was that the best thing foundations can do is to change mindsets of people who can then go and make change in their local environments. He gave the example of New York City, where he helped to change city planners' ways of thinking when it came to making cities people friendly. Various stakeholders in New York City then went on to transform key locations, such as Times Square, into places meant for people, rather than cars.