Georgia became a member of the World Bank on August 7, 1992. Since that time, the World Bank has provided concessional credits and loans to finance 69 projects, totaling over US$ 2.7 billion, across different sectors of Georgia's economy. The current portfolio consists of 12 active investment projects and development policy operations totaling US$ 789 million. Over the past 25 years, the World Bank's partnership with Georgia has evolved along with changing local and global contexts. In the early 1990s, following Georgia’s turbulent independence from the Soviet Union, the partnership was launched with a $10 million Institution Building Project, designed to expand the government’s capacity to transition Georgia to a market economy.

Go to our publication - WB-Georgia, Celebrating 25 years of partnership. 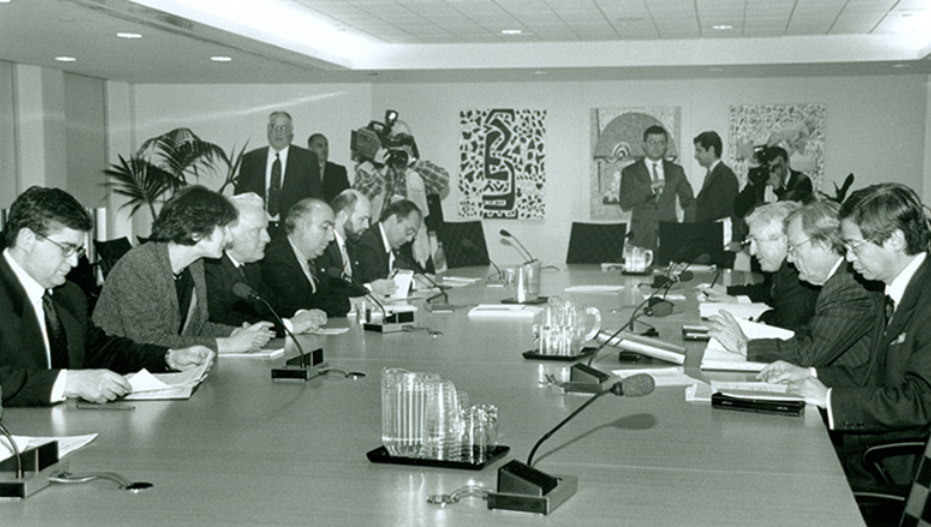 During the mid-1990s, the World Bank supported the government’s "first generation reforms" to remove the remaining market distortions and controls inherited from the central planning system. It also helped establish and maintain macroeconomic stability, foster growth, and improve financial discipline in the private and public sectors.

Over the following years, the World Bank concentrated its support on financing projects in areas such as municipal infrastructure, agriculture, judiciary, protected areas and cultural heritage.

A Country Assistance Strategy (CAS) details the Bank’s strategy and work-plan to assist client countries achieve their development goals. It describes all of the Bank’s planned operations in the country - lending, analytical work, and technical assistance.

From 2004, the focus of the World Bank's program was supporting the government in critical reform areas such as public sector management and social safety nets. The Bank also supported new investments in transport and energy infrastructure with the aim of enabling private sector growth and strengthening Georgia’s role as a transit corridor.

The Bank continued financing the Roads Sector in Georgia, in particular the essential rehabilitation of the East-West Highway and selected secondary and local roads, thereby generating short-term employment in the regions, as well as building connectivity and strengthening the country’s competitiveness.

The Bank also helped to establish the International School of Economics of Tbilisi. Interventions in the health sector helped modernize health care facilities, and above all, ensured that the poor have access to affordable health insurance. The Bank also helped the Government achieve a major breakthrough – the introduction of a Targeted Social Assistance program.

The international community committed to supporting reforms proposed by the new government of Georgia and responded favorably to its request for assistance for the most urgent and highest priority areas for the years 2004-2006.

Working closely with the Government and using rapid response procedures, housing for new internally displaced persons was completed by early December 2008, allowing many of these people to move out of temporary facilities before the onset of winter.

The Bank continued to provide budget support to Georgia, backing critical reforms to strengthen the foundations for medium-term competitiveness and growth while promoting social inclusion.

Most of the commitments were concentrated on the on-going East-West Highway and secondary roads projects, followed by urban development, energy and irrigation sectors. The investment portfolio also included the Georgia National Innovation Ecosystem Project aimed at increasing innovative activities of firms and individuals and their participation in the digital economy.

Although the Bank’s investment portfolio has been predominantly in infrastructure, the overall partnership has been broader with in-depth dialogue and analytical and knowledge activities in many areas, particularly as a form of complementary engagement with the two DPOs.

The Bank continues to support the health and education sectors in Georgia through technical assistance and DPOs. The new Systematic Country Diagnostic (SCD) for Georgia was launched early in 2017, in close consultation with the authorities and other stakeholders, in order to identify the most critical constraints and opportunities facing the country. The SCD is expected to be delivered early in Fiscal Year 2018 and will inform the Country Partnership Framework for Fiscal Years 2018-2022.

The World Bank Regional Office in Tbilisi has 36 staff members at present. Representing diverse nationalities, professional experiences, and fields of expertise, they have been the driving force over the years behind important results achieved in the country. In this video, some of these staff share what it means to them to work for the World Bank in Georgia.